By Christine P and Aaron E

He’s right! As Alexander Kaufman of HuffPost reported, “the effort demonstrates one of the clearest examples yet of … a municipal version of the Green New Deal.” (More on this framing later.)

The Act is actually a package of bills, listed below. Other laws in the package lay out specifications for wind turbines in the city, set up a financing mechanism for green projects, and recommend or require “green roofs,” which provide a building insulation, slow water run off during heavy storms, and clean pollutants from the air. But the cornerstone bill is Intro 1253, formerly known as the “Dirty Buildings Bill,” prior to a rebrand as the #GreenNewDeal4NYC. Buildings are responsible for approximately 70 percent of New York City’s greenhouse gas emissions. Intro 1253 confronts these emissions head-on while forecasted to create thousands of jobs meeting good labor standards.

Intro 1253 targets buildings over 25,000 square feet, which make up just 2 percent of the city’s buildings but account for about half of all building emissions. These large buildings will have to reach mandated greenhouse gas emissions levels per square foot, reaching emission reduction goals of 40% by 2030 (and over 80% by 2050) by retrofitting their heating and cooling systems and improving their operations and maintenance strategies.

The strategies required for compliance will vary by building type, use, and current emissions levels. Massive, luxury developments with energy-sucking amenities and inefficient designs (such as Trump Tower) will have to work the hardest to reach the energy targets, or pay millions of dollars in annual fines. Rent-regulated housing and places of public worship are exempt from compliance. Prescriptive greenhouse gas reducing upgrades that do not trigger Major Capital Improvement rent increases must suffice for rent-regulated housing until our housing laws are updated properly.

The Real Estate Board of New York (REBNY) had been fighting against comprehensive energy efficiency legislation for the past decade behind the scenes, while publicly forming unlikely partnerships with “green” groups, such as the Natural Resources Defense Council. When REBNY came out against this Act, we pushed even harder to pass it.

DSA’s Ecosocialist Working Group is proud to have worked with a broad-based, diverse, and people-powered coalition to pass the Act. We beat the real estate lobby, and we passed groundbreaking climate legislation!

The Act puts avoiding climate disaster and creating good jobs ahead of the short-term profits of private real estate developers. Greenhouse gas emissions know no borders, and thus reducing emissions here reduces the risk of floods and violent storms both locally and globally. When other cities follow our lead, conditions will continue to improve.

Far more must be done to address the climate crisis, and the Act doesn’t embody all the principles we demand of a Green New Deal.

Inspired by the work of Providence DSA and in collaboration with DSA chapters across the country, our working group has pivoted toward a priority campaign centered around one of the critical Green New Deal principles: democratizing control over major energy systems and resources. Our Public Power NYC campaign is directly confronting our energy landlords, Con Edison and National Grid, and their Cuomo-appointed rubber stamp, the New York Public Service Commission, to call for democratization, decarbonization, decommodification, and decolonization. 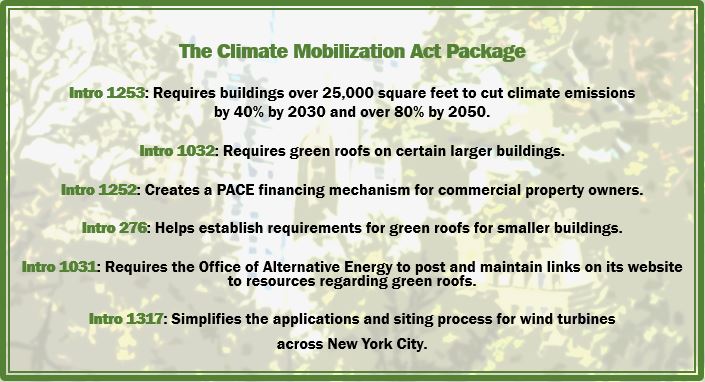 For more information and to get involved in current campaigns, contact climate@socialists.nyc.

Listen to Revolutions Per Minute